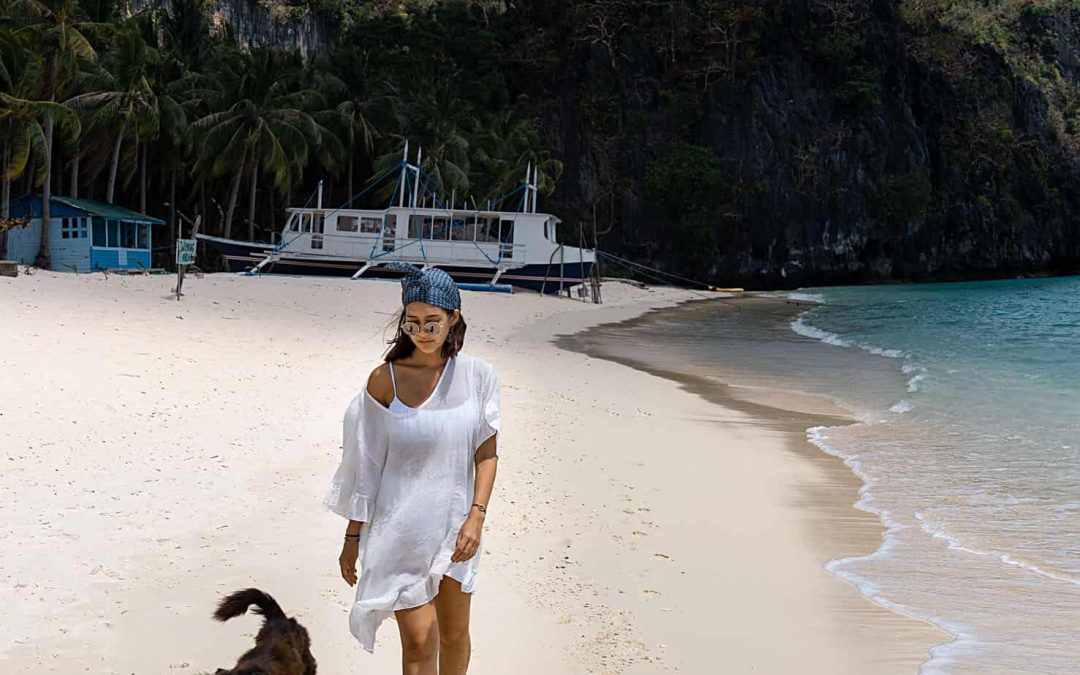 Seven Commandos Beach is one of the most beautiful stretches of sand in El Nido, Palawan. A popular El Nido island hopping stop, we were incredibly fortunate to have the entire beach to ourselves when El Nido had just reopened to domestic tourism.

Rather than take an island hopping tour to Seven Commandos Beach, we opted to rent our own kayak and explore the area by ourselves. We recommend everyone tries kayaking in El Nido, as it’s by far one of the best things to do in El Nido.

WHERE IS SEVEN COMMANDOS BEACH & HOW TO GET THERE

Seven Commandos Beach is on the mainland, not far from the town of El Nido. Despite being just around the corner from town, you’ll still need to access Seven Commandos Beach by the sea. To switch things up from the regular El Nido island hopping routes, we decided to rent a kayak from Corong Corong Beach and explore at our own pace for a day.

WHAT TO BRING TO SEVEN COMMANDOS BEACH

Prepare for your trip to Seven Commandos Beach with our must have travel essentials.

We rented our kayak from Jem Brex Kayak Rental, right there on the beachfront of Corong Corong Beach. It was super convenient and the kayaks were really well maintained, the owners were also very accommodating with our last-minute decision to go kayaking. It’s usually ₱600/$12 for a full 8 hour day but they have a great COVID special for ₱350/$7 at the moment! You can also rent a half-day for ₱200/$4.

We had planned to rent one kayak each so we could get better photos, but the wind wasn’t in our favour. We didn’t make it very far before turning around and hopping into one kayak. We passed a number of stunning beaches and rock formations along the way and pulled into Papaya Beach as our first destination.

WHAT TO EXPECT AT SEVEN COMMANDOS BEACH EL NIDO

We pulled up in the kayak along the uninhabited stretch of Seven Commandos Beach. Much like the neighbouring Papaya Beach, we were greeted with powder-soft sand and crystal clear water. We were lucky enough to have the place to ourselves!

The public section of Seven Commandos Beach is lined with native picnic huts, ordinarily filled with tourists in a pre-pandemic lifetime. This place can get busy with boats constantly coming in and out, so we felt especially grateful to experience it completely empty.

As isolated as Seven Commandos Beach is, it wouldn’t be the Philippines without a makeshift basketball hoop attached to a coconut tree. We can imagine this being a hit amongst the tour guides when El Nido tourism is in full swing.

STAY THE NIGHT AT VELLAGO RESORT

The other side of Seven Commandos Beach couldn’t be more different from the public end. This section has been privatised and turned into a boutique resort, Vellago Resort. We didn’t stay the night, but the place looked really peaceful and seemed the perfect place to retreat from the world for a few nights. You can check out rates on Agoda here for Vellago Resort, one of the best El Nido Palawan resorts.

Despite there being development, there was still plenty enough public beach space to enjoy. If you’ve got a bit of money on you, you could even stop for lunch at Vellago Resort’s bar/restaurant, which is open to walk-in guests. Just expect resort prices!

It’s not often we dedicate an entire section of a post to beach dogs, but this was such a highlight of our Seven Commandos Beach trip, it’d be rude not to. There are two resident dogs at Seven Commandos Beach, apparently brothers. They welcome the tourists and hang around for pats (and if we’re being honest, mostly food). Dog lovers will be in literal paradise.

After an hour or so of hanging out with them, we decided to make our way back to Corong Corong Beach. As we were paddling away, one of the dogs started swimming after our kayak! According to the locals, this guy swims between Seven Commandos Beach and Papaya Beach every day, which is no small feat. If you’re worried about him following you, just paddle into shore until he gets there and then leave. He’ll be too tired to give chase again.

If you thought Seven Commandos Beach was secluded, Papaya Beach takes it to a whole new level. Aside from a swing and a few flags, there really is nothing else to distract you on Papaya Beach. Take the kayak around and enjoy this deserted paradise, one of the best beaches in El Nido.